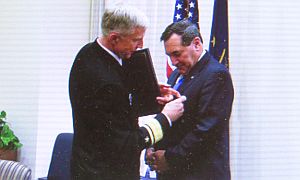 Washington, DC — U.S. Senator Joe Donnelly today received the Department of Defense Medal for Distinguished Public Service from the U.S. Navy. Donnelly received the award for his dedication to ensuring that the U.S. Armed Forces and Hoosier servicemembers have the resources and preparation they need to successfully complete any mission.

Donnelly said, “It is an honor to receive this award from the Department of Defense. Our brave men and women in uniform work nonstop to keep our country safe and protect our freedoms. They and their families deserve nothing less than our wholehearted support, and I will continue working to get them the resources they need to succeed on the battlefield and here at home.”

Secretary of the Navy Ray Mabus said, “This award was presented to recognize Senator Donnelly’s tremendous support for our Sailors and Marines and his forceful advocacy for the resources needed to maintain a strong Navy and Marine Corps. We are fortunate to have such a dedicated leader in the U.S. Senate.” 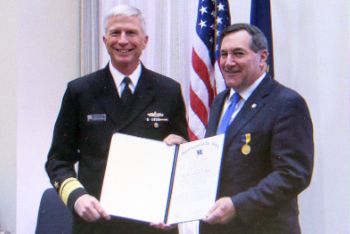 As a member of the Senate Armed Services Committee, Donnelly has worked to ensure our servicemembers have the best training and technology by supporting one of our nation’s most important military laboratories at NSA Crane. Last summer, Donnelly hosted Defense Secretary Carter and Chief of Naval Operations John Richardson at Crane’s Naval installation. Donnelly has also made military mental health a hallmark of his Senate work. The last piece of his “Servicemember and Veteran Mental Health Care Package” became law in December 2016, his fourth military mental health reform effort enacted in his four years in the Senate.