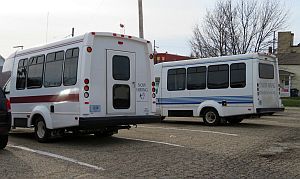 The Pathfinder Services vans parked in the River Park Square parking lot in downtown Plymouth came up in Monday night’s Board of Public Works and Safety meeting.

Councilman Mike Delp said he had been contacted over the weekend by a constituent who said they didn’t like seeing the transportation vans sitting at the park.

Delp stopped by the Pathfinder office on Water Street Monday and spoke to someone in the office about the complaint.  She didn’t think it would be a problem to move them to one of the public parking lots instead of in the park. Delp suggested the lot by Hoffman Brothers Auto Parts or behind the former NIPSCO building.

Mayor Senter said during the last couple of Farmer’s Markets in the fall the vans were parked in the vendor parking spots.  Something they will watch this coming year.

Park Superintendent Mike Hite said he asked them to move the vans about a month ago to allow visitors to view the Christmas light show at River Park Square.  Hite said they assured him they would be moved but that didn’t happen.

Note:  When WTCA went to take a picture of the vans Wednesday afternoon they were parked in the city lot behind Hoffman Brothers Auto Parts