Trash Toters Trashing up the View on City Streets 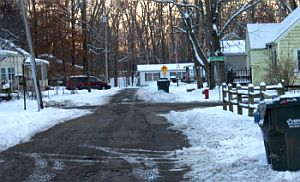 This week, members of the Plymouth Board of Public Works and Safety heard the complaint of trash toters on the roadway by Ken Mackey.

Mackey lives on South 5th Street and told the board members his neighbors are leaving their trash toters very near the edge of the roadway all the time.  He said, “They are making my road look like an alley way.”  He also noted that the roadway is so narrow that two cars cannot pass and with the cans on or next to the road surface there isn’t room to pull over.  Mackey said, “I’m worried about the future.  This could happen all around town.”

Plymouth Mayor Mark Senter said the city began the trash toters in the fall of 2009.  At that time they discussed an ordinance requiring the toters be moved back from the street but though citizens would know to move them back.  Senter said, “We haven’t had that many complaints.” 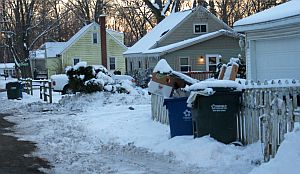 Councilman Jeff Houin followed suit saying “I don’t like the way it looks either.”  He wondered if the toters were sitting on the city’s right of way.

Councilman Duane Culp said, “It’s a sad fact, but there are people who just don’t care.”

The city attorney was directed to review ordinances from other communities and see if the city should consider creating an ordinance requiring the trash toters be removed from the street curb within a specific amount of time.