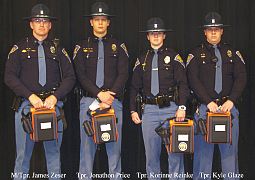 On Monday, December 12, 2016, the Bolt for the Heart (BFTH) foundation continued to deliver on the promise to equip Indiana State Police patrol vehicles with lifesaving Automatic External Defibrillators (AED) with the gift of 95 additional AED’s. This was in addition to the more than 50 AED’s presented to the state police in March of this year.

Locally six troopers from the Bremen Post were on hand to receive their new AED’s. The troopers work in Marshall, Elkhart and St. Joseph Counties. Three of the six troopers, Kyle Glaze, Korinne Reinke and Jonathan Price recently participated in the Bolt for the Heart 5k virtual run for the Bremen Post which helped raise money for the AED’s.

In 2015, the Board of Directors of Bolt for the Heart identified the Indiana State Police as the recipient of AED’s from funds raised in the 2015 Thanksgiving Day run. Superintendent Carter participated in that event and ran the 5k in his state police uniform