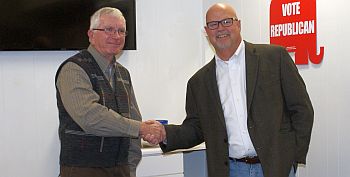 Thursday evening the four republican precinct committee people (Greg Compton, Bob Manuwal, Alyssa Miller and Michelle Longanecker) from the City of Plymouth gathered at headquarters for a caucus to select the person who will fill the upcoming vacancy on the City Council.

City Council member Mike Delp will be resigning his at-large position on the council to accept his county commissioner elect seat the first of the year.

Both candidates are not new to politics; both campaigned in the municipal election a year ago.  They were both seeking one of the three at-large seats open.   In the November 2015 election Walters ended up 4th while Richeson was 5th.

During Thursday night’s caucus each candidate had up to three minutes to tell the four precinct committee people why they were seeking the position and the qualifications they had.  At the conclusion a paper ballot vote was taken and the result was a 3 to 1 vote with Bill Walters being selected to fill the vacancy on the Plymouth City Council.

Walters will be sworn into office prior to the first meeting of the Plymouth City Council in January 2017 and fill out the three remaining years for Mike Delp.