At 12:19 Officer Bob DeLee responded to 315 North Michigan Street for a two vehicle crash where one of the vehicles ended up on the curb and stairs leading to the bank. 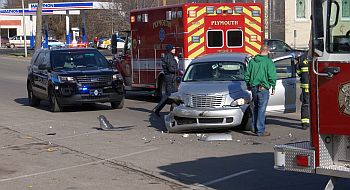 Officer DeLee’s report stated that 87 year old James Campbell of Plymouth was backing his 2008 Volvo out of an angled parking space in front of the bank and ran into a 2008 PT Cruiser driven by Christine Eaton of Plymouth.

Campbell told the officer he believed he continued to press on the accelerator pedal instead of the brake causing the vehicle to spin counter clockwise 180 degrees where it climbed the curb and came to rest on the steps of the bank near the sidewalk. 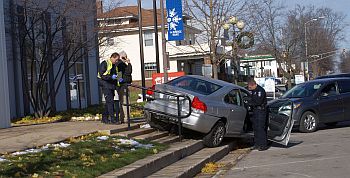 Plymouth Fire responded to the scene but both drivers refused medical treatment.