Two Injured In Crash at Lincoln Highway and Fir Road

Officer McFarland found 24 year old Brittani Smith of South Bend trapped in the 2004 Hyundai about 25 yards out in the field on the north east side of the road.

78 year old Sara Kauffman of Etna Green was still sitting in the 2005 Chrysler she was driving.

The accident investigation determined that Smith was north bound on Fir Road approaching the stop sign at the intersection with Lincoln Highway and failed to yield to traffic on Lincoln.

Smith pulled out in the path of Kauffman who was east bound on Lincoln Highway.

Smith had to be extricated from her vehicle.  She was flown to Ft. Wayne Parkview by Samaritan with multiple injuries.

Kauffaman was transported by ambulance to a Kosciusko County Hospital for a complaint of pain to the head and neck. 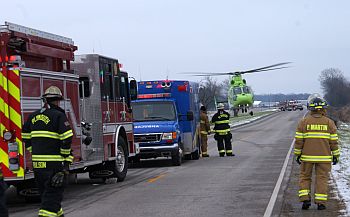 Alcohol is not a factor in the accident.

Assisting Marshall County Police at the scene of this accident was Bourbon Fire/EMS/Police and the Plymouth Fire Department.