Causey Given Key to the City 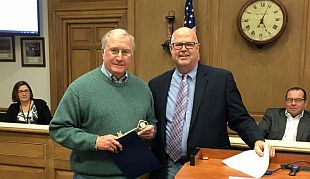 Monday evening Plymouth Mayor Mark Senter read a proclamation and presented Jim Causey with the Key to the City.

Causey has been a dedicated Park Board member for 17 years, serving as the Plymouth Public Library representative.  Causey was appointed during the Mayor Jack Greenlee administration in 1999.

Mayor Senter noted the many positive changes Causey has seen during his time on the Park Board: the Greenway Trail, creation of River Park Square and the all-inclusive Freedom Park in Packard Woods.

Causey said, “10 year ago we opened the first Greenway Trail and now we are well on our way for phase II.  I’m really pleased about that. I wanted to see the tennis court be finished up, and that’s happening.  I’ve seen some very significant changes.”