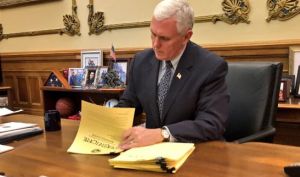 The law requires the Governor to sign these documents in order to certify each of Indiana’s electors. Each governor is required by law to certify the electors from their respective state for each presidential election. Secretary of State Connie Lawson’s office delivered the official, original copies for the Governor’s certification of the “duly elected (and now) appointed Electors for President and Vice President of the United States in and for the State of Indiana.” Governor Pence’s office has returned the signed documents to the Secretary of State’s office.