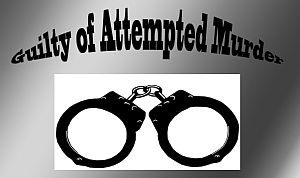 After hearing testimony for three and a half days, jurors in the Lane Dodson trial arrived at a guilty verdict on four of five charges. The jurors were excused by Superior Court I Judge Robert Bowen for deliberation just after 11:30A.M. on Friday and the court was notified near 1:00 P.M. that they had reached a verdict.

Dodson was charged with attempted murder after firing at Plymouth Police Officer Matthew Emenhiser during a traffic stop on December 29, 2014. Dodson was injured during the incident when Emenhiser and ISP Trooper fired their weapons upon seeing Dodson pull his weapon from his shoulder holster. He received a guilty verdict on the charge.

Dodson was additionally charged and found guilty on two counts of domestic battery and one count of intimidation against his then-wife Heather Dodson.

The lone not guilty verdict was on a count of Battery with Moderate Bodily Injury at a level 6 felony. The charge was brought about after Dodson and Justin Pointon had an altercation on December 29, 2014. Both Emenhiser and Dodson were arrested following the fight between them that testimony during the trial showed stemmed from an affair between Pointon and Heather Dodson.

On the final day of the trial, both the state represented by Marshall County Prosecutor, Nelson Chipman, and Deputy Prosecutor, Tami Napier, and Defense Attorney, Marc Morrison, presented their final arguments.

Prosecutors presented five rebuttal witnesses as well. Don Curl, ISP Detective Sgt., said he had interviewed an additional witness on Thursday. Curl indicated that he didn’t think it was necessary to interview the witness before the trial.

Defense Attorney, Marc Morrison, said, “You didn’t realize it was necessary? Were you aware of Heather Dodson’s deposition?” Curl said he only read it briefly.

Two domestic battery charges had been filed against Lane Dodson for “punching Heather Dodson resulting in bodily harm” and that he drew a deadly weapon (a gun) stating that he would kill her. The incident took place on or about December 23 or 24, according to court records.

The incident was not reported to authorities until December 29. The traffic stop on December 29 was, in part, initiated by the domestic violence report and radio communication that Dodson was possibly looking for his wife and was armed.

Testimony throughout the trial verified that Dodson carried a weapon at all times and that he did have a carry permit. That carry permit has been revoked.

During earlier testimony from Heather Dodson, she said she thought the child had seen Lane beating her through a window in the shed.

The state then called the eleven-year-old son of Heather Dodson. He would have been nine when the incident of domestic violence occurred. The child said he had been listening through vents in their house that were connected to a shed in back when he heard Lane and Heather yelling.  He said, “I heard Lane tell my mom to beg for her life.” He went on to say, “My sister heard my mom scream. I told my sister to call the cops, but she couldn’t find a phone.” He said he saw his mother’s eye black and her arm bruised later.

Emenhiser and Ennis both testified again that Dodson had a gun during the traffic stop on December 29.

Napier opened her final statements saying, “ This is a story about one man’s anger that culminated on December 29, 2014.” She said, “When you find him guilty, you will not be telling him something he doesn’t know.”

Morrison said, “This is not about a man being angry. It is a tragedy.”

The maximum sentence for the Attempted Murder charge is 65 years. The Intimidation charge that was entered as a felony, carries a 6 year maximum. Both of the Domestic Battery charges were brought as A Misdemeanors and carry a maximum of 1 year each.

Dodson had been on house arrest following the shooting incident until November 16, 2016. On that date, he had requested that the ankle tracking bracelet be removed. Judge Bowen allowed the removal; but since the device was a part of his bond, Dodson was immediately taken to the Marshall County Jail. He had been allowed to serve house arrest due to surgeries and medical procedures needed for the injuries he sustained after being shooting.