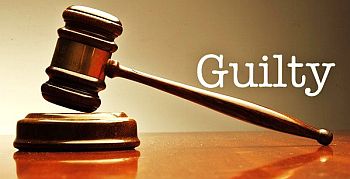 After hearing testimony for three and a half days, jurors in the Lane Dodson trial arrived at a guilty verdict on four of the five charges. The jurors were excused for deliberation just after 11:30A.M. on Friday and the court was notified near 1:00 P.M. that they had reached a verdict.

Dodson was charged with attempted murder after firing at Plymouth Police Officer Matthew Emenhiser during a traffic stop. Dodson was injured during the incident when Emenhiser and ISP Trooper Ennis fired their weapons upon seeing Dodson pull his weapon from his shoulder holster.

Dodson was additionally charged with two counts of domestic battery and intimidation against his then-wife Heather Dodson.

The lone not guilty verdict was on a count of Battery with Moderate Bodily Injury at a level 6 felony. The charge was brought about after Dodson and Justin Pointon had an altercation.

The maximum sentence for the Attempted Murder charge is 65 years. The Intimidation charge that was entered as a felony, carries a 6 year maximum. Both of the Domestic Battery charges were brought as an A Misdemeanors and carry a maximum of 1 year each.