Reinholt to Retire from Plymouth Public Library, Heather Barron will be New Director

Suzie Reinholt has worked at the Plymouth Public Library for 41 year and has been the director of the library for 31 of those years.

Early next year she plans on retiring and gave notice to the Library Board of Directors.

The search has been on to hire a new director for the Plymouth Library and that selection has happened. 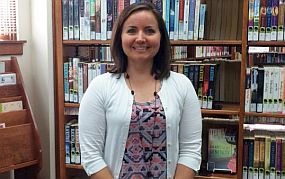 Although it won’t really be happening until February or March of 2017, the new director will be Heather Barron.  Heather is currently the director at the Bourbon Public Library.  The change won’t happen until the Bourbon Library Board finds a replacement for Barron.

Reinholt said, “She will be terrific.  You’ll love her!”

When asked about the changes she has seen over her 41 years Reinholt said, “The changes are definitely related to technology.”  She said, “Keeping up with technology has been one of my challenges but we are very fortunate to have staff members that excel in that area.  I am surrounded by a great staff and have the support of a great library board and community!”

Another major change Reinholt experienced was the major expansion of the Plymouth Public Library.  In 2000 the library purchased the former Pilot News building immediately to the north conducted a major expansion into the current facility they have today.

Suzie’s comments also included, “Just recently I read, ‘If you started to work at a job BEFORE the Internet and you are still there, it’s time to go!  This is not a retirement home!’   So true.”