Three days had been set aside for the trial; however, Judge Bowen told jurors it may last until Friday.

The state called four witnesses to speak to incidents that happened in December of 2014. Heather Tasker gave testimony concerning a physical altercation on December 28, 2014 in front of her apartment in Plymouth. Dodson and Justin Pointon were involved in the fight that led to both of them being arrested. Dodson was found with a pistol concealed in a shoulder holster . He did have valid carry permit at the time.

Heather Klinedist, neighbor and babysitter for Lane and Heather Dodson, said she observed severe bruising on Dodson’s then wife Heather. She said she told Heather’s sister, Samantha Harmon, who had once been married to Lane Dodson, that she should check on her sister. 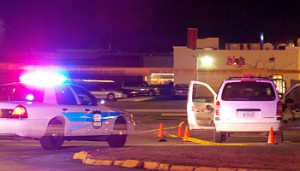 Harmon convinced her sister to take the children in the home and go to Harmon’s house. At that time, they notified the police of the alleged battery.

Heather Dodson testified that her then husband beat her following an argument and threatened her with a gun if she told anyone. In her testimony, Heather Dodson said she had had a one time sexual encounter with Pointon.

Also testifying was the sister’s grandfather, Larry Christian, who said he had observed the bruises on Heather. He said Lane Dodson asked him where Heather had gone, but he didn’t tell him. He then called the sisters to tell them Dodson was angry and heading for them.

Heather Dodson was being interviewed in a patrol car and was taken to the Plymouth Police Department for safety and to continue the interview . She testified that she learned Lane had been shot by listening to radio broadcasts at the PPD.

Dodson had been pulled over in the Plymouth Kmart parking lot by Trooper William Ennis. When radio communication was heard by Plymouth officers, Patrolman Matt Emenhiser and Col. Bridget Hite, went to the scene. Allegedly, Dodson shot one time through his windshield in the direction of Emenhiser and one time through his vehicle roof. When he was observed making a move consistent with exiting his vehicle, Emenhiser fired his service weapon striking Dodson three times.

Because of his injuries and medical procedures, Dodson was put on home detention with an ankle tracking bracelet . On November 16, 2016 Dodson requested that the devise be removed. Since it was a requirement of his bond, the removal meant that he would be lodged in the Marshall County Jail.

During that same hearing, Morrison motioned to withdraw from the case. The defendant informed the court he no longer wanted to be represented by Morrison. However, on November 18, the court ordered Morrison to remain on the case. Morrison was the fourth attorney on the defense with two other attorneys withdrawing and one other stating conflict of interest.

The trial is scheduled to resume on Wednesday at 9:00 A.M.