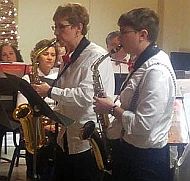 The Marshall County Church Orchestra recently presented the community with a special concert to get the holidays started on a happy note.  Under the direction of Don Harness the 40 piece orchestra presented “A Classical Christmas”.

“A Classical Christmas” was hosted by Plymouth Knights of Columbus #1975.  Refreshments were provided by Miller’s Assisted Living of Plymouth.

Orchestra members Annette Ray and Cindy Flagg chose the classical and holiday music for the program.  Flagg wrote the narration.   There were a total of seven orchestral selections; plus a saxophone duet by Ray and Danielle Pinkham and a trombone duet featuring Ben Bain, Nic Muller, and David Pinkham.   On vocals throughout the evening were sisters Sharon Phillips and Becky Rowe; Quentin Flagg, Cindy Flagg and a father/daughter duet by Jim Davis and Laura Stutzman.

The concert began with the wonderful classical rendition of The Four Season by Antonio Vivladi.  The orchestra then turned to popular as well as sacred holiday music.  They included such hits as “Highlights from Frozen”, “Dance of the Sugar Plum Faries”, “Sleigh Ride”, and a medley from “White Christmas.  Other selections included “Ode To Joy” “The Christmas Song”, “Little Drummer Boy”, Waltz of the Flowers”, and “I’ll Be Home For Christmas”.

If you were unable to attend this production, the MCCO will be preforming “A Classical Christmas” Thursday evening, December 1st  at the Hamlet United Methodist Church at 6:30 p.m. Central Time (7:30 p.m. Eastern standard Time).  For more information about playing with the MCCO call Don Harness at 574-936-7357

Photo Caption:   MCCO saxophonists Annette Ray of Bourbon  and Daniel Pinkham of Walkerton perform a duet during “A Classical Christmas” which was held at the Knights of Columbus in Plymouth.