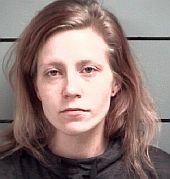 The driver toll Centralized Dispatch that the vehicle had gone off the roadway and rolled over onto the vehicle`s side. The driver explained that she was unable to get out of the vehicle.

County Officer Les McFarland then responded to the scene and found a gray Dodge van on the west side of the roadway on its side.

Officer McFarland helped the female driver, 25 year old Tyne Byers of Culver out of the vehicle. It was believed that she was under the influence of a controlled substance and was transported to St. Joseph Regional Hospital for a chemical test.

Byers was arrested for Operating a Vehicle While Intoxicated on a controlled substance and booked into the Marshall County Jail on a $1,500.00 cash bond.