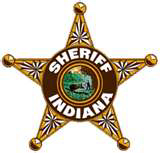 Court Ordered Hearings was number 10 on the list with Unlawful Possession of a Syringe was 9th.  Domestic Battery was 8th with Probation Violations being 7th and Driving While Suspended 6th.  Taking a lot at the top 5 you find Battery, Marijuana and Operator Never Licensed with number 2 being Failure to Appear the Operating While Intoxicated number one.

There were a total of 158 jail bookings in October with the average daily jail population in October being 134.