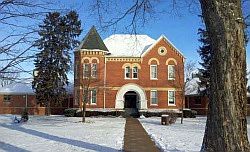 New federal regulations are changing the designation of the Shady Rest Home.  The federal government has classified the facility as an Institution for Mental Disease or IMD.  The change will not allow the Bowen Center to charge Medicaid for services since they own the facility.  As a way to continue offering the same services and getting paid for them, the Bowen Center has come up with an alternative that required County Commissioner approval.

To allow the center to continue with operations as usual, they have created a separate corporation named Shady Rest Home Inc. that will control the facility separate from the Bowen Center.  This change takes the Bowen Center out of the line of operations, thus the need for commissioner approval.

Kurt Carlson from the Bowen Center said a Board of Directors has been created with Commissioner Kurt Garner being one of the members.  He estimated the change to come in January 2017.

The commissioners unanimously approved moving the deed to the property to Shady Rest Home Inc. when the time is appropriate.