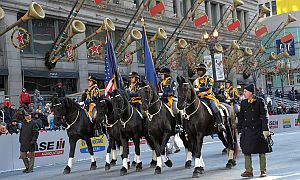 Culver Military Academy’s Friesian Mounted Color Guard will be riding in the McDonald’s Thanksgiving Day Parade in Chicago. This is the third time in the past four years the color guard has participated in the parade. The Thursday morning parade will be televised regionally, nationally, and streamed online by WGN.

The parade route will run approximately one mile along State Street, beginning at Congress and moving north to Randolph. It will step off at 9 a.m. EST (8 a.m. CST) and last approximately three hours. The temperatures on Thanksgiving Day are expected to be in the low to mid-40s. 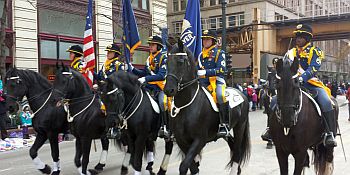 The parade will be broadcast regionally on WGN-TV (Channel 9) and nationally on WGN America. It will also be streamed live on WGNTV.com.

The McDonald’s Thanksgiving Day Parade is one of the largest holiday parades in the country, with more than 5,000 participants and relying on 1,300 volunteers. The parade’s origins go back to 1934, when it was called the Christmas Caravan. The parade was conducted as a way to lift the spirits of Chicago residents suffering through the Great Depression.