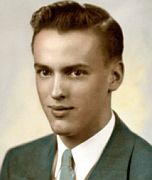 Dr. Lloyd C. France passed away Saturday evening at the Center for Hospice Care in Elkhart at the age of 89.

Born in Byron Center, Michigan, he was the 5th of 6 children born to Paul and Dora France.

Lloyd’s early formative years were spent during the Great Depression.  During grade school and high school, he excelled academically and was involved in many extracurricular activities, sports and various leadership roles in a number of student organizations.

Upon graduating from High School in 1945, with WWII still ongoing, he enlisted in the U.S. Navy at the age of 17.  During his service in the military, he graduated first in his class at Electronics School and became an instructor at The Great Lakes Naval Training Center until his honorable discharge in December of 1947.

After completing his service in the military, he attained an Associates Degree in Science with a straight A average at Grand Rapids Junior College and a Bachelor of Arts Degree with Distinction at the University of Michigan.   He was accepted at the University of Michigan Medicine School in 1950 and was awarded permanent membership in the Alpha Omega Alpha Honor Medical Society.  He received his Doctor of Medicine Degree with Distinction in 1954.  He became a General Practitioner for a year and in 1956 decided to become a surgeon which required an additional 4 year residency in General and Vascular Surgery which he completed at Henry Ford Hospital in Detroit, Michigan as well as additional training in Orthopedics.

Dr. France and his family moved to Plymouth Indiana in 1960 where he practiced General Surgery in association with fellow practitioner Dr. James Rimel for 41 years until retiring in September 1998.  During the years he practiced he introduced new techniques of fine suture repair and surgical treatment as well as introducing endoscopic procedures and performed the first successful operation in North Central Indiana for ruptured aortic aneurysm removal with graft replacement.  He also inserted the first ‘permanent’ cardiac pacemakers in Marshall County by opening the chest and suturing directly into the heart.  He served many years as the Chief of Surgery both a Parkview Hospital and later at St. Joseph Regional Medical Center – Plymouth Campus and several years as President of the Medical Staff of the Hospital as well as membership in the Indiana State Medical Association.