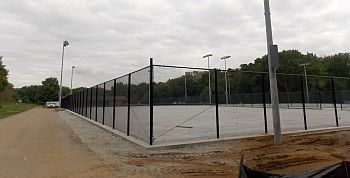 Mike Reese from the Troyer Group updated members of the Plymouth Park Board on the Tennis Court Project last week.

Resse said, “The project is slowly progressing, not as fast as we’d hoped.”  He said a surfacing issue has come up with the subcontractor not being able to come in September to get the surfacing installed while the weather was still warm enough.  The weather must be at last 50 degrees for 48 hours in install the surfacing product.

The contractor, Michiana Contracting didn’t want to take the risk of having the surface installed when the weather isn’t optimal due to the possibility of pealing and flaking.

Working with Michiana Contracting, temporary stripping has been installed on the courts so they can be used for practice.

Reese said the tennis court surfacing will be completed in the spring when the air temperatures warm up. It’s anticipated sometime from mid April to late May.   He said Classic Turf said the nets will be down for about a week to complete the surfacing project and the Plymouth Tennis Court project is the first one on the list for spring completion.

The new road back to the Freymen Shelter is complete.

A change order will be presented for additional top soil.  The soil on site that was stripped from the project is much less than anticipated.  Indiana Earth, a subcontractor on the project estimate as many as 20 loads are needed to complete the project.