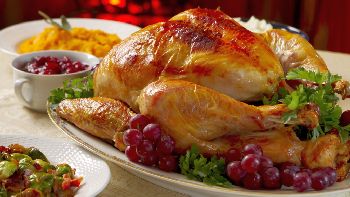 The average the cost for a traditional Thanksgiving dinner as recorded by INFB’s survey is at its lowest level since 2010.

The survey showed an average price of $46.81 for the meal, which includes a 16-pound turkey, the ingredients for stuffing and pumpkin pie, and other components of a traditional holiday feast. This is $3.52 lower than last year’s total – $4.24 lower than the all-time high price, which was recorded in 2012 – and represents a decrease of around 7 percent.

Nearly all of the 12 items on the holiday shopping list declined in cost, but the main factor in the overall price decline was turkey, which dropped by 16 cents per pound or $2.36 for a 16-pound turkey.

“As a consumer, I’m happy to see lower prices,” said Isabella Chism, Indiana Farm Bureau second vice president, who farms with her family in Howard County. “As a farmer, I’m honored to help produce the food for family Thanksgiving celebrations.”

One important reason for the decline in turkey prices, noted Dr. John Newton, director of market intelligence for the American Farm Bureau Federation, is that turkey production is up about 8 percent this year, rebounding from the 2015 Avian flu crisis in the Midwest.

INFB’s survey is part of a national survey coordinated by the American Farm Bureau. A total of 148 volunteer shoppers (including 16 from Indiana) in 40 states participated. The shopping list includes turkey, bread stuffing, sweet potatoes, rolls with butter, peas, cranberries, a relish tray of carrots and celery, pumpkin pie with whipped cream, and both coffee and milk, all in quantities sufficient to serve a family of 10 and leave plenty for leftovers.

Farm Bureau volunteer shoppers are asked to look for the best possible prices, without taking advantage of special promotional coupons or purchase deals.

The national survey also showed a decrease but that decrease was considerably lower than on the Indiana survey. The total for the AFBF survey was $49.87, down 24 cents from 2015.

Aside from turkey, two other items that decreased in price on the Indiana survey were milk, down 50 cents/gallon to $2.19, and whipping cream (½ pint), down 7 cents to $1.88.

The decreases in both milk and whipping cream can be attributed to a significant drop in the prices dairy farmers receive.

“Milk prices are at their lowest level since 2009,” Newton said.

The only item that increased significantly in price on the Indiana survey was a 16-ounce bag of frozen peas, which rose by 57 cents to $1.64.

The American Farm Bureau has been coordinating this survey since 1986, and INFB has been participating since at least 1993.

“When you look at inflation, it (the cost of the meal) is actually cheaper today than it was when we first started doing this survey in 1986,” Newton added.