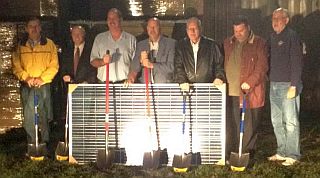 The Plymouth Board of Aviation Commissioners broke ground on the new Solar Generating Plant which will be located on the airport at Tuesday night’s meeting.  The solar farm will be in operation by early December and tested and selling power to NIPSCO by early January.   The project is being run by Telemon Corporation and Construction by Morton Construction began Monday.  After 15 years, the solar farm will belong to the airport.

Following the ground breaking, the board meeting was filled with good news but little action.  The airport was connected to the city sewer system last Friday.  All FAA approvals were received for the AWOS weather station. Michiana Contracting already has the equipment and will begin construction soon.  The hope it will be operating by January first 2017 although FCC approval is running behind.

The board began discussing the Capital Improvement Plan especially the possible future closing of Lilac Road.  That plan will come up at the next meeting but it is unlikely that they will take further action on the road closure.  The FAA is unlikely to fund any further extension of the runway without having several large jet aircraft based at the airport.  Since no funding is available, there is no point in closing the road.