INDOT Readies for the Winter Season 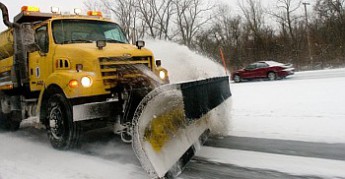 Governor Mike Pence has declared this week, Nov. 13 through 19, as Winter Weather Preparedness Week in Indiana.

The Indiana Department of Transportation began preparing for the upcoming winter season soon after the snow and ice melted last spring. INDOT’s top winter priority is removing snow and preventing ice on more than 11,000 miles of interstates, U.S. highways and state routes.

Last winter, 211,428 tons of granular salt and more than 2.8 million gallons of salt brine were deployed on state and federal highways. INDOT continues to receive deliveries of salt and already has more than 225,000 tons on hand.

Last winter, INDOT’s yellow plow trucks logged nearly 3.8 million miles – the equivalent of 152 trips around the earth or 8 round trips to moon.

INDOT will have more than 1,000 plow trucks available to clear roads of snow and ice this winter. INDOT purchased 72 new trucks to replace older equipment and 12 new tow plows – making 22 available for this winter. The tow plow is pulled behind and to the side of a INDOT plow truck, allowing one driver to clear two lanes at once.

INDOT has been holding job fairs and aggressively hiring seasonal and full-time workers over the past few months. Applications are still being accepted for some locations at www.in.gov/indot/3163.htm.

Both plow operators and supervisors attend classroom training to learn new technology and techniques. Plow operators are already familiarizing themselves with their snow routes. Operational planning meetings are being completed this month with Indiana State Police and local officials.