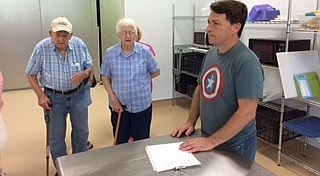 Residents of Miller’s Assisted Living recently visited the Peaceable Primate Sanctuary to learn about the baboons the sanctuary rescues.  The first question most people ask when they hear about this excursion is:  “Where is it?”  and then they ask:  “How did you find out about it?”

Miller’s Assisted Living Activity Director Cindy Flagg easily answers both questions.  The sanctuary is located in an 80 acre wooded area in the countryside of Pulaski County.   And,  Flagg found out about the sanctuary when she read the newspaper.

“The story was on the front page of the local paper,” stated Flagg.  You couldn’t miss it.  There was a picture of a baboon eating an ear of corn.  Across from it was a picture of Scott (the owner) by a sign that said Peaceable Primate Sanctuary!”

Flagg explained that part of her job as an activity director is to assist the residents in developing physical, social, spiritual and intellectual growth.  One of the ways she is able to do this is by listening, reading and paying attention to events going on in the community and beyond.

Flagg explained further, “If I learn about something happening and I think the residents would enjoy seeing or visiting or taking part in, I do my best to make it possible for them to take part.” 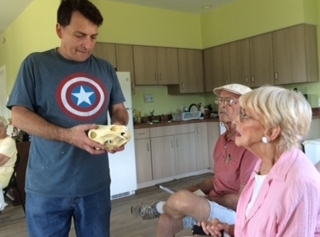 The sanctuary, which is the dream of Scott Kubisch of Illinois, rescues live baboons that are used for testing in laboratories across the United States.   At the end of the article it stated that Kubisch would occasionally host groups at the sanctuary.  Flagg called the sanctuary the very next day.  After hearing and agreeing to the rules of a tour, she secured a date with Kubisch.

The rules involve things such as:  1.  For the safety of the baboons, do not visit if you have a cold or flu bug.  2.  Those who come for a tour must be able to walk on their own as the ground is sandy, rocky and up a slight incline.  3. No wheel chairs, walkers or power-chairs are allowed.

The rules were shared with the residents and seven brave men and women plus three volunteers signed up for the adventure.  Thus, on Thursday, August 4, the group from Miller’s Assisted Living meandered through the Pulaski County countryside to visit the Peaceable Primate Sanctuary.

Kubish greeted the group upon arrival and started the tour in the building which houses the sanctuary’s state of the art stainless steel kitchen.  He showed the large walk-in freezer and walk-in cooler and explained how he has partnered with a local Winamac grocery store to donate produce to the sanctuary.  He also explained the nutritional diet that is necessary to keep the baboons healthy in their retirement and how it is prepared on a daily basis in the spotlessly, clean kitchen.  The area next to the kitchen houses the “toys” the staff is able to use to provide enrichment activities for the baboons.

Kubisch then led the group of residents to the next building which actually houses the baboons.  The structure is an indoor/outdoor cement area surrounded and covered by a chain-link fence.  Kubisch and his staff had set up a tent to provide shade for the residents where they could sit and watch the baboons while they took part in their daily enrichment activity.  On this particular day the baboons were given a mixture of nuts and seeds as well as an ear of corn still in the husks.  The residents were surprised to see the baboons shuck the corn and eat it just as any human would do.  They discarded the cobs however they later went back and ate the cobs too!

After watching the baboons finish off their corn cobs the group followed Kubisch to the sanctuary’s air conditioned office where they were able to cool off.  Kubisch continued to share his knowledge and love of all animals but,  especially the baboons.  He talked about the dream of building a peaceable sanctuary and all the work that has gone in to making it become a reality.

The staff of Peaceable Primate Sanctuary is planning a fundraiser/open house on Sunday, October  9th from 12:00 p.m. – 5:00 p.m.  The residents of Miller’s Assisted Living urge everyone to take time to attend the open house and learn about the sanctuary and the fascinating baboons.  There will be an opportunity to meet the baboons:  Jerry, Periwinkle, Violet, AJ, Juniper and Timmy as well as Scott Kubisch and his staff.   There will also be guided tours and purchase merchandise available for purchase. Plus,  raffle tickets, food and even the opportunity to sponsor a baboon.  There is a $10.00 donation fee to attend the event.  To RSVP call 574-896-0590 or email baboonsanctuary@yahoo.com.  You may also visit Peaceable Primate Sanctuary on facebook.