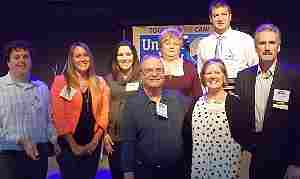 Recognition was given to several main givers.  The top Faculty and Staff giving per capita was presented to the Plymouth Community School Corporation while the Morrow Insurance Agency received the award for the top Professional giver per capita.  Top Commercial giver was Mid City Supply and U.S. Granules Corporation was the top Small Industry giver while American Container was the top Large Industry giver.  The number one giver per capita was the Morrow Insurance Agency.