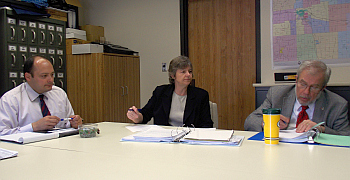 Tuesday morning the Marshall County Election Board met and discussed the candidates that filed their campaign finance reports late.

The reports were due by noon on April 15th according to state statue or the candidates could face a daily fine for not having them filed in the Clerk’s Office.

At the April 19th meeting the Election Board asked Voter Registration Clerk, Donna Pontius to call each candidate and tell them the board gave them until Thursday, April 21st to get their paperwork in.

On April 26th the Marshall County Election Board unanimously voted to waive the late filer’s penalty of $50 per day.  They also decided going forward to provide a notice in the candidate packs that they will impose fines for late filings.