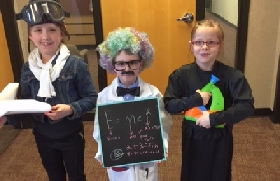 Three second graders from Webster Elementary shared their knowledge of historical figures with the Plymouth School Board on April 12. Each one dressed the part and read their notes from the research they had done as a project. Payge Houston, Dolan Berkeypile, and Pamela Berg gave an overview of their chosen person from the past, along with a timeline of their accomplishments.

Houston portrayed Amelia Earhart, an American aviator and the first female to fly solo across the Atlantic Ocean. Berkeypile told of the ways that Albert Einstein, physicist, developed theories in science.

The presenters are the students of Susan Szucs, Elizabeth Johann, and Carrie Swain.