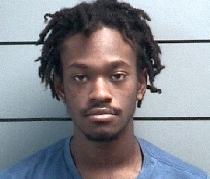 About 3:30 in the afternoon on Sunday March 27 the Marshall County Sheriff’s Department was contacted by Fulton County in reference to a road rage incident where a gun was displayed. The complainant and suspect vehicle were northbound on U.S. 31 about to enter Marshall County. The suspect vehicle was describes as a tan Chevrolet Malibu.

County Officers Bryant and Bragg along with Sgt. Rudd from the Argos Police Department located the suspect vehicle near Argos.  The vehicle was traveling at nearly 100 m.p.h.

A felony traffic stop was conducted and the driver,18 year old Anthony Moore of South Bend was taken into custody. Officers located the gun in question which turned out to be a BB gun, as well as a shotgun in the trunk.  They also located a small amount of Marijuana and alcohol.

Mr. Moore was lodged at the Marshall County Jail for Reckless Driving, Illegal Possession of Alcohol by a Minor and Possession of Marijuana. His cash bond was set at $1500.00.