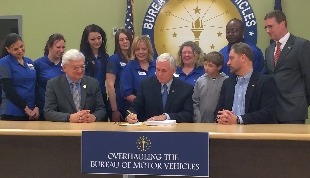 INDIANAPOLIS, IN – Governor Mike Pence Thursday signed House Enrolled Act (HEA) 1087, which brings consistency and predictability to the Bureau of Motor Vehicles’ (BMV) procedures and transactions. The Governor signed the bill in a public ceremony at the Greenwood BMV.

“I challenged the Bureau of Motor Vehicles to ensure the back office works as well as the front office, and today we’ve made great progress in doing just that as we sign into law House Enrolled Act 1087,” said Governor Pence. “My administration has always made cutting red tape and improving government efficiency a priority. True to that mission, I’m proud to sign this bill into law today to cut 163 user fees and streamline operations to better serve Hoosiers across the state. Today, we’re turning a new corner at the Indiana Bureau of Motor Vehicles.”

This legislation simplifies the provisions of Indiana Code that govern the BMV, streamlines registrations and driver’s licenses and reduces complexity within the overall fee structure.

When these laws go into effect on January 1, 2017, customers will notice the following changes, among others:

“This is a historically significant step towards transformational change at the BMV and fundamentally changes how our agency conducts transactions for customers,” said BMV Commissioner Kent Abernathy. “Work on this bill was a tremendous bipartisan effort. I would like to thank Governor Mike Pence and his staff, Rep. Ed Soliday, Sen. Carlin Yoder, and Sen. Jim Arnold for their leadership and for giving the BMV the statutory tools needed to make the back office run as well as the front office.”

More information about HEA 1087 and the changes taking at the BMV can be found on the “BMV Improvement Page” at www.myBMV.com.