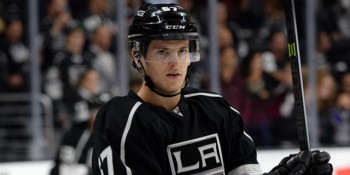 Special thanks to Jan Garrison and Culver News for this story…

Add Nic Dowd’s name to the list of Culver alumni with National Hockey League playing experience under his belt. The 2008 graduate made his debut with the Los Angeles Kings Tuesday night in a 2-1 loss to Ryan Suter ’01 and the Minnesota Wild.

The Kings recalled Dowd, a forward, from the Ontario Reign of the American Hockey League on Tuesday. He is 10th CMA player to take to the ice in an NHL uniform.

“The veteran guys told me I’d done it a million times, just go out there and do it again, don’t think,” said Dowd of his debut to lakingsinsider.com. “It’s a little easier said than done, but as the game progressed, I felt like I settled in.

“I felt really good,” Dowd said of settling in after a high-stick penalty early in the first period. “I think the adrenaline kicked in, and I was fortunate that my first shift was in the o-zone, not the d-zone, and just happened to take the high stick.”

He finished the game with a plus-1 rating and total ice time of 12 minutes, 15 seconds. He also won 62 percent of his face-offs.

“I was just trying to play a simple game, read off of the other guys out there. There’s a lot of veteran leadership on this team that started before the game, and you kind of build confidence off of them, so I just worked with what I was given,” Dowd said.