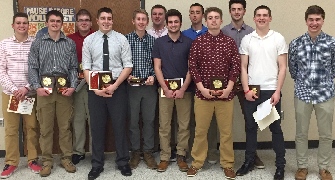 LETTERWINNERS ( from left to right) are: 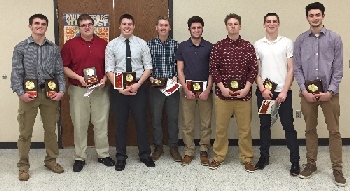 Jack Barron for the best Free Throw % and the Play Hard Award. Ty Irwin received the Co-Mental Attitude Award and Matt Friar was this year’s Most Improved player.  Nick Felke received the award for the Most Assists and was a Co-Most Valuable Player.  Trevor Neidlinger was the other Co-Mental Attitude award winner while Braydon Davidson had the most 3pt. Field Goals and Cam Eveland was selected as the Outstanding “Defensive” Player. Josh Anders was the other Co-MVP, had the Most Rebounds,  and the highest Field Goal %.