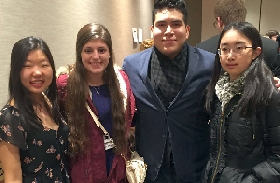 Four Culver Academies students made a “simply incredible” journey to New York City over the weekend to perform in Carnegie Hall as part of the Honors Performance Series.

Thursday: “We went to dinner with our respective groups. I got to go to Ellen’s Stardust Diner, which is a place actors work while they’re trying to get on Broadway. They sang the whole night while we were eating and it was unbelievable.”

Friday: “Rehearsals started bright and early. We rehearsed from 9 a.m. – 5 p.m. The rehearsals were tough, I must admit. We were constantly stopping and starting, fixing things from notes to pronunciation. My conductor (Dr. Elizabeth Schauer) was so precise. She got mad when we put the emphasis on ‘e’ instead of the ‘I’ when we were singing ‘kisses.’ Although the practices were long and arduous, they truly paid off in the end.”

Friday night: “Mancha, Neri and I saw Phantom of the Opera. That was my first time ever seeing a Broadway show. I was completely speechless. I was questioning whether or not they were human! The music was phenomenal and the actors were so passionate about their performance.”

Saturday: “It was another long day of rehearsals. Saturday night we went to Rockefeller Center and got to see the amazing view of the city from the top of the building.”

Sunday: “We woke up early and had our final rehearsal. Then we went to Carnegie and had our sound check. When we walked into Carnegie Hall, everyone’s jaw dropped. The white theatre was embroidered with gold and the seats were all a velvet red. The grandeur of the hall was breathtaking. I remember looking over at Neri while she was going up to get on stage. She just shook her head in amazement. So we all had our sound check and then went downstairs to wait. When we were walking out onto the stage for the performance, I looked up at the packed theatre and I was once again dumbfounded. I couldn’t believe that I was singing at THE Carnegie Hall. We took position and performed our pieces. The acoustics were AMAZING.

“When it came to our last piece, the emotions were high. There was another sort of energy in the room. At that point, everyone on stage realized where we were and what we had accomplished to get there. As we all belted out the last note of We Rise Again, tears filled everyone’s eyes. I was overcome with joy and I started tearing up.

“Everything I had worked for was paid off in that moment. It was one of the most memorable experiences of my entire life and I’ll never forget the feeling I had when I looked out into the crowd as they gave us a standing ovation. I will also never forget looking up into the nose-bleed seats and seeing the outline of my parents cheering for me. I was so blessed they were able to share the experience with me.

“After the Honors Women’s Choir was done performing, Neri and Mancha performed with the Honors Concert Choir. The girls choir got to watch from the back of the hall. Their faces were beaming as they walked out on stage. Their performance was amazing and after the show we all got together back at the hotel. Neri came up to me and said, ‘Tori, we just sang at Carnegie Hall.’ We took pictures and got some dinner. That night, we got to go on a yacht for our post-performance party. We danced the night away and definitely had too many desserts.”

Styers noted that since Zhao was involved in the instrumental music performance Sunday evening, the choral group didn’t get to see her perform. Monday morning, they took a final sightseeing tour and then flew home to Culver.