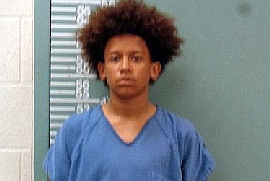 McKinstry is one of the suspects involved in the February 29th incident on the north side of Plymouth where a gun was pulled on the victim trying to sell a cell phone.  Money was taken from the victim while at gunpoint and the three suspects left northbound on Michigan Street in a PT Cruiser.

Raquan Charles McKinstry is currently in the Marshall County Jail with a cash bond of $50,000.00.    The investigation is continuing.