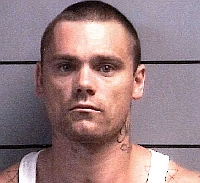 Ryan Smith, 33, of Knox was sentenced March 2 in Marshall Superior Court Number I to a 22 year sentence for dealing methamphetamine.

In open court, Smith admitted in August of 2015, he was in a vehicle with Kristen Cobbs, Brandon Adkins and Justin Stetler that was stopped by Marshall County Sheriff’s Department Deputies Jordan Rans and Brandon Cooper. Marshall County Undercover Narcotics Investigation Team detectives were also present at the scene. Deputy Cooper’s K9, Arras, conducted an open air sniff around the vehicle and indicated to the presence of drugs in the vehicle.

A search of the vehicle and its occupants revealed 12.2 grams of methamphetamine, Xanax and heroin as well as smoking and/or snorting devices. All of the occupants were charged with drug-related crimes.

Prosecuting Attorney Nelson Chipman praised the work of Marshall County Sheriff’s Department Deputies Jordan Rans and Brandon Cooper and the Marshall County Undercover Narcotics Investigation Team. “Aggressive enforcement of drug crimes in our county is essential to the stability, safety and health of our community. Our ability to do so is impossible without the outstanding work of our local law enforcement officers. This case demonstrates how their work, in partnership with my office, has taken a serious drug dealer out of our community. One of our objectives is to make sure that message is heard by others who may intend to deal drugs in our county.”

Both Cobbs and Adkins have been sentenced in relation to their involvement in this case. Adkins is already in the Indiana Department of Correction.