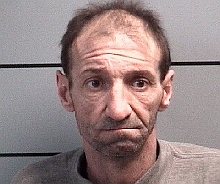 A driver who was allegedly driving on the wrong side of the road Saturday was arrested on multiple charges.

At approximately 10:00 a.m. February 20th Officer Les McFarland with the Marshall County Sheriff’s Department was southbound on Michigan Road observed a red Ford Ranger traveling northbound on Michigan Road in the southbound lane.   A traffic stopped was conducted and the driver, 51 year old Rex Lewallen from Syracuse was suspected to be operating under the vehicle while on a controlled substance.