The works of three of America’s most noted photographers from the 1930s will be on exhibit at the Culver Academies from February 20 through July 31.

The photo exhibit, drawn from the holdings of the Culver Academies’ art collection, will include 20 images by Eudora Welty from her Mississippi portfolio. Representing documentary photography, though better known as an author, Welty worked for the Works Progress Administration during the 1930s.

27 photographs by Alfred Eisenstaedt, a noted photojournalist with an international reputation will also be on display. Eisenstaedt came to Culver Military Academy in 1939 to do a story for Life magazine. 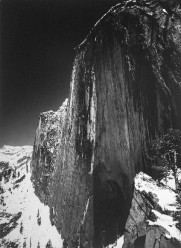 15 images from the Yosemite Portfolio III by Ansel Adams, created in 1960 for the Sierra Club from negatives taken between 1926 and 1959 are also part of this exhibit. Adams represents aesthetics and is the most well-known and beloved of all American photographers.

The photo exhibit is free and open to the public in the Deer-Zink Gallery of the Crisp Visual Arts Center on Academy Road. The opening weekend hours are 3 to 5:30 p.m. this Saturday and 1 to 5 p.m. this Sunday. After this weekend, the Crisp Center will resume its regular hours on Sundays from 1 to 5 p.m. and Wednesdays from 10 a.m. to 4 p.m. The exhibit is available by appointment by calling Robert Nowalk, curator of the Academies’ collection, at 574-842-8278.

“Together, these three photographers present a vision of America in the first half of the 20th Century that is diverse and alive, truthful yet hopeful,” Nowalk said.