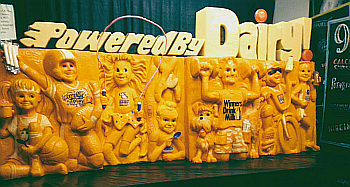 The cheddar monument was the result of Sarah “the Cheese Lady” Kaufmann—holder of the Guinness World Record for largest cheese sculpture—and her team’s 233 hours of work.

Kaufmann has sculpted at the state fair for eight years now in coordination with the American Dairy Association. The purpose of the eight-foot-wide sculpture, located at the DuPont Food Pavilion, is to promote Indiana dairy and educate about the importance of dairy for nutrition.

“Art is the hook to talk about the importance of eating right,” said Kaufmann, “developing good habits now when [children] are young.”

“Dairy is a good source of protein that children need to do all of this stuff because protein is energy,” said Kaufmann.

One of the figures on the sculpture stood out because of her blonde hair.

“I modeled one of the girls on the sculpture after a girl who kept coming back to watch me since I started,” she said. “I said, ‘You know I need a face for that little girl,’ and I asked her what she likes to do, and she said tumble. [I told her,] ‘I’m going to make her you. I’ll make her blond and call her Haley just like you.’”

The team began carving on-site last Thursday, the day before the fair started, after the two 640-pound and six 40-pound blocks arrived from Crawfordsville and were situated on a cinderblock stage kept at 50 degrees.

Jenni Purcell, senior director of communications and wellness for the American Dairy Association for Indiana, said the exhibit keeps getting bigger and bigger with each passing year, garnering attention from fairgoers and across the nation. Two years ago, the association featured a cheese sculpture of cows weighing 2,000 pounds.

“It gets national coverage. We’ve had a hit pop up in Hawaii—Indiana State Fair Coverage in Hawaii,” she said. “I also imagine people have this on their to-do list for the state fair.”

On Wednesday, a woman and a young man leaned over, gazing at the tiny details of the mural.

“I was describing it to my son. He has a visual impairment,” said Greenwood resident Terry Lee. “We’ve been coming to the fair since he was little, and we always visit this and attractions like this.”

“It’s always fascinating to think anyone can create something out of cheese. It’s amazing. It’s the same with the sand sculptures they’ve had in the past,” said Lee. “They’ve had unbelievable sculptures made out of sand. You know, when you aren’t artistic enough to do that, you can always admire someone else doing it.”

While most sculptors will use marble or wood, Kaufmann claims to be one of just three people in the world known to use cheese as their artistic medium.

Originally from Wisconsin, the Cheese Lady began her art career as a child and moved on to work as art director for the Dairy Farmers of Wisconsin.

“That’s where I ran into cheese carving. So I would hire people to carve for me, and I loved the carving and did a few with them at trade shows,” Kaufmann said. “And they said I could do them when I left that position. I hadn’t really thought about it, so cheese found me.”

During her first six months, she created 32 cheesy artworks, including one during a trip to the 1996 Super Bowl with her favorite team, the Green Bay Packers.
In 17 years, she has carved a six-foot alligator for a University of Florida football game, a replica of the U.S.S. Ronald Reagan aircraft carrier and a 12,500-pound cheddar mammoth.

“I am a full-time cheese carver. That’s my profession,” said Kaufmann. “I need to find an apprentice because I’m going to die in the harness. Then what is Indiana going to do? Who’s going to carve their cheese?”

Alan Hovorka is a writer for BSU Journalism at the Fair, a Ball State University immersive-learning project placing 25 student journalists at the heart of the Midway to tell the weird and wonderful stories of the 2014 Indiana State Fair.