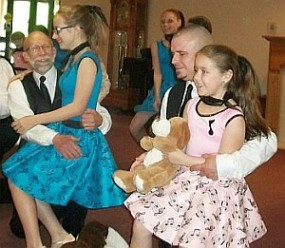 05/27/14 The Lifeplex Dance Academy Jr. Ballroom Dancers performed at Miller’s Assisted Living Thursday evening, May 22nd.  The dance troupe is under the direction of Mewsette Cartwright.  The LDA showcased several dances that will be on the line-up of their upcoming dance recital which will be held at the Plymouth High School auditorium.

The evening of entertainment began with a father/daughter dance to the music “How Much Is that Doggie In the window.  Grandfather’s and ballroom friends were also included in the dance.

The song “They” is about the story of popularity in schools.  The Jr. Ballroom girls portrayed this dramatic story of the popular and not-so-popular through their dance.  Fortunately the story ends with the girls accepting each other and coming together as one group.

To the delight of the audience dance instructor Terri McElheny and her “Dancing With The Stars” partner David Kinney performed a ballroom/tap routine.  The program ended with the Jr. Ballroom Dancers performing a rousing medley of songs from “Footloose”.

Those who performed at Miller’s Assisted Living include: