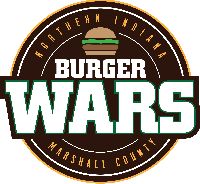 05/19/14 March Madness may be over, but bracket fever continues in Marshall County with the launch of a Burger Wars Bracket to find the best place to get a burger in the county as voted on by customers. Eight Marshall County restaurants have been selected to be voted for round by round to find the best burger restaurant in the county, beginning Friday May 16, 2014 at noon. Those making it out of the first round include: Castaways, Christo’s Family Dining, Dickies at Swan Lake, Hoople’s, J’s Pub, The Brass Rail, The Lakehouse Grille and The Original Root Beer Stand.

Voting is hosted on the Marshall County Convention and Visitors Bureau’s website www.visitmarshallcounty.org/bugerwars. The second round lasts ten days. Following the end of the second round, the next two rounds will last a week. Winners of the best burger restaurant in Marshall County will be announced June 9, 2014.

The start & end dates for each round are as follows:

Let customers’ voices be heard!  They can log in to vote daily, each week of the competition to make sure their favorite restaurant gets the credit it deserves. Voters can keep checking the website and Marshall County Tourism’s social media pages for a chance to win prizes through mini contests held throughout the voting process. Most importantly, voters are encouraged to sign in and vote each round for a chance to win the grand prize of $100 gift certificate to the winning restaurant announced at the end of the competition.