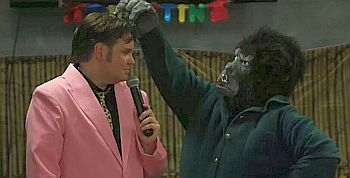 Entertainer Quentin Flagg was surprised by a special guest at his 31st Safari themed birthday bash during the weekend of April 26th – 27th.  In the middle of Flagg’s show as he sang “The Lion Sleeps Tonight” a gorilla tapped him on the shoulder.   The audience roared with laughter and applause at the surprised look on Flagg’s face.  Without missing a beat Flagg continued the song as the gorilla danced with him during the remainder of the song. 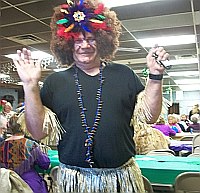 Other highlights of the annual birthday show included a costume contest each day, door prizes, an all request section of the concert.  Flagg and his two guest entertainers Steve Bobbitt of Peoria, Il. and Ed Parzygnat of Chicago took turns singing favorites requested by the fans during the weekend event.

Flagg’s birthday party was also an opportunity for him to give back to the community by collecting non-perishable food items for the Marshall County Neighborhood Center.  As usual Flagg’s fans were generous in their giving.

Photo:  Entertainer Quentin Flagg is surprised at his Safari Birthday Party by a dancing gorilla at Memories Reception Hall.