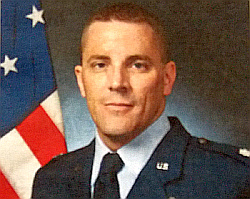 Lieutenant Colonel Mark J. Faulstich, a 1994 graduate of Plymouth High School was selected as Commander of the 1st Range Operations Squadron 45th Operations Group at Cape Canaveral Air Force Station in Florida.  The Change of Command Ceremony was held on Friday, May 2nd and Mark’s parents, Mark C. and Joyce Faulstich from Plymouth were able to attend the ceremony.  Prior to his command selection he served as the Director of Operations, 45th Operations Support Squadron at Patrick AFB, Florida.

Lt Col Faulstich received his commission in 1998 as a graduate of the U.S. Air Force Academy, where he earned a Bachelor of Science Degree in Space Operations.  In 1999, after completing Undergraduate Space and Missile Training at Vandenberg AFB, California, Lt Col Faulstich was assigned to the 45th Range Squadron as a Range Operations Commander and then moved to the 45th Operations Support Squadron as the Chief, Spacelift Commander Training.

In 2002 he attended the Air Force Institute of Technology at Wright-Patterson AFB, Ohio where he earned the Dean’s Award for best thesis research and his Master of Science Degree in Space Operations.  From 2004 to 2007, Lt. Col. Faulstich was assigned to the 17th Test Squadron at Schriever AFB, Colorado where he served as a Test Analyst, Test Director and Flight Commander.

In 2010, Lt Col Faulstich was assigned to Headquarters Air Force Space Command, Peterson AFB, Colorado serving as Chief, Space Operations Test and Evaluation and Executive Officer to the Director of Air, Space and Cyberspace Operations.  In 2012, he supported Unite States Central Command on temporary duty at MacDill AFT, Florida as a Force Management Plans Officer.  Following his temporary duty, he returned to Peterson AFB and served as the Chief, Combat Plans Section.

Finally, in July 2013, Lt Col Faulstich was assigned to the 45th Operations Support Squadron prior to taking command of the 1st Range Operations Squadron.

The 1st Range Operations Squadron was activated on December 1, 2003.  Formerly known as the 45th Range Squadron whose lineage can be traced back to its inception on November 12, 1991, when the Eastern Space and Missile Center transformed into the 45th Space Wing.