Kosciusko County – Indiana State Police Lieutenant Chad Larsh was driving to a meeting last week in rural Kosciusko County when an erratic driver caught his attention. Minutes later Larsh was chasing the man down with the assistance of local farmer in a tractor.

Larsh, who is the Bremen Post Commander, was running the vehicle information before stopping the erratic driver when he turned and Larsh lost sight of him. Within a few minutes Larsh was able to locate the purple Pontiac Grand Am parked in a driveway at 4985 N 920 W, in Etna Green. Larsh exited his car in attempt to find the driver when he spotted him running through a farm field.

Larsh returned to his car with his emergency lights activated and paralleled the man on 400 N as the man began to run faster through the field. Larsh was following the man in his car when he was contacted by state police dispatch. The dispatcher informed Larsh that they were talking to the farmer that was plowing the field the suspect was running through. The farmer, who had called in on his cell phone, offered to help out and picked up Larsh on the side of the road. The farmer drove Larsh through the field to the suspect where the man surrendered. 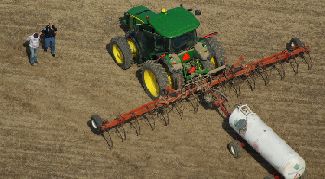 Larsh commented that the man was more than surprised when he jumped out of the tractor with his taser drawn. “I’m pretty sure he never saw it coming. The man was assuming that the farmer was there to help him,” stated Larsh.

The suspect was identified as Jacob P. Miller, 41 of Plymouth. Purportedly Miller admitted that he got scared when he saw the police car because he was on probation and had a suspended driver’s license. Miller was arrested for resisting arrest and driving while suspended.

The arrest was photographed from the air by ISP Master Trooper Dan Ringer who happened to be flying his personal aircraft in the area at the time.