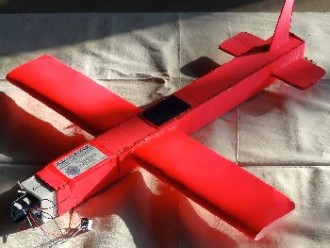 04/23/14 Weather permitting, on Saturday, April 26, the Fox Valley Composite Squadron (a unit of the Civil Air Patrol based in West Chicago, IL) will perform air and ground searches for a high-altitude balloon payload that went missing in Marshall County, Indiana. The public’s assistance is also requested and a reward will be issued to anyone who finds and returns the entire assembly: a 28-inch fluorescent pink paper aircraft and internal electronics payload. 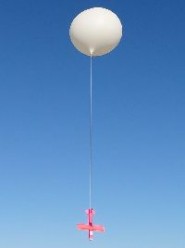 Back on December 28, 2013, Fox Valley Composite Squadron launched the paper airplane aboard a large, high-altitude, helium balloon from Kankakee Airport in hopes of breaking the Guinness World Record for “Highest Paper Airplane Flight from a High-Altitude Balloon”. The project was started as a Science, Technology, Engineering and Math (STEM) project for the unit’s cadet members (youth ages 12-17).

The team was able to track the aircraft’s progress via a real-time GPS tracking system. Everything was progressing nicely, but, just Northwest of Plymouth, IN, as it ascended through 85,153 feet – just 4,438 feet shy of the existing 89,591 foot record – both the balloon and aircraft appeared to experience a failure that sent everything descending back to Earth. The aircraft descended through 54,981 feet where it then stopped reporting location and altitude… information critical to recovery of the aircraft; But the aircraft’s telemetry continued to broadcast data for another eight minutes before it too was lost. A Civil Air Patrol aircraft was immediately dispatched to the area but failed to receive the aircraft’s locator transmitter. 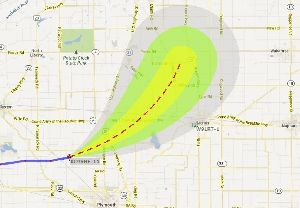 By analyzing this “forensic data” – the flight path, telemetry information and historical weather – the team was able to forecast an area where the aircraft and payload are likely to have landed [see attached image]. The team is sharing this information with the public in hopes that everyone in (and around) the area will check their properties for the missing paper aircraft and electronics payload.

The Civil Air Patrol is using the missing payload as an additional training opportunity – with parallels to one of their real-world missions of Search & Rescue of Missing aircraft in the United States – and launching several air sorties to visually scan the search area.

Ground Teams will also be deployed to further investigate any sightings made from the aircraft. A reward is also being offered to anyone who finds and returns the paper aircraft and payload.

But, this search will be especially challenging as the object is relatively small. The object is a 28-inch wingspan, fluorescent pink, aircraft made of cardboard and poster board [see photo]. The aircraft contains a styrofoam payload section that houses the GPS tracking system, HD video camera, flight computer and batteries.

Considering that the aircraft may have been covered by snowfall, searches were delayed until after the Spring melt. If anyone discovers this paper aircraft, any of its contents, or have tips, please call the Fox Valley Composite Squadron at 1-877-308-5665. The public’s assistance is also requested in allowing Ground Team members access to property. Access will only be requested if search results indicate a possible target.

— is located at DuPage Airport (West Chicago, IL) and is currently comprised of 36 Cadets (youth 12-17) and 44 Adult Members. These members volunteer their time and expertise towards Emergency Services, Aerospace Education and Cadet Programs. The Squadron meets most Fridays at 7:00 PM at DuPage Airport and welcomes anyone interested in learning more about participation to attend a meeting. A map to the meeting location and additional information about the squadron is available at http://www.foxcap.org

Civil Air Patrol, the official auxiliary of the U.S. Air Force, is a nonprofit organization with more than 60,000 members nationwide. CAP, in its Air Force auxiliary role, performs 90 percent of continental U.S.

inland search and rescue missions as tasked by the Air Force Rescue Coordination Center and has been credited by the AFRCC with saving more than 100 lives this fiscal year. Its volunteers also perform homeland security, disaster relief and counterdrug missions at the request of federal, state and local agencies. The members play a leading role in aerospace education and serve as mentors to over 25,000 young people currently participating in CAP cadet programs. CAP has been performing missions for America for more than 70 years. For more information on CAP, visit http://gocivilairpatrol.com