Speed & Alcohol May be Factor in Crash 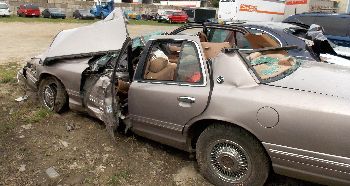 04/22/14 On Saturday, April 19th at 3:36 P.M. the Marshall County Sheriff’s Department received a 911 call in reference to a single vehicle accident on Tulip Road north of 9C Road where the 1995 Mercury passenger car had struck a tree. The caller indicated that the subjects were possibly entrapped in the vehicle. Plymouth EMS and Fire along with officers from the Marshall County Sheriff’s Department responded to the scene.

Two helicopters were used to transport the subjects to Memorial Hospital in South Bend. A female juvenile also in the vehicle escaped the crash with no injuries.

Plymouth Fire and EMS were credited for their exemplary job of freeing the patients from the vehicle along with Civilian Samaritans that played a key role in giving aid to the patients.

Alcohol and speed are believed to have played a factor in this crash. A formal criminal case is being prepared and will be sent to the Marshall County Prosecutor’s Office for review.