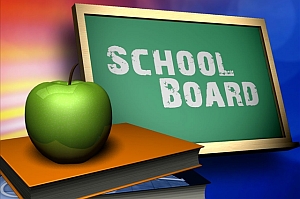 04/18/14 Thursday evening the Plymouth School Board conducted a special public meeting to interview candidates for the seat vacated by the recent resignation of Gary Cook.  Although an elected position, the statutory process requires candidates to submit a letter of interest.  If interviews are conducted, they must be in a public meeting, thus the need for the special meeting.

Candidates were interviewed individually by the school board members.  Each candidate was given 20 minutes to tell members a little bit about themselves and why they were interested in the position and then board members asked several questions and allowed the candidates to ask questions of them.

Board President, Todd Samuelson said he was worried that no one would show interest in the school board seat but he was very pleased with the four quality candidates who were interviewed last night.

Local business owner, Tony Gamble grew up in Plymouth and went to school from Kindergarten through 9th grade.  His family then moved and he graduated from Oregon Davie in 1992.  He said he was vested in the Plymouth School System with three children currently attending school here.   Gamble said, “I’m living off what the community gives to me.  I feel it’s time to give back to my community.”

Mike Clary is originally from Knox. He and his family moved to Plymouth in 2002.  He has one daughter in the high school now and his two other children are grads of PHS.  A member of the Band Boosters, Clary said, “I have a genuine interest to make sure students have what they need to succeed.” He said having the right equipment and best educators is important.

Plymouth Park Department employee, Jenny Sickmiller is a 1995 graduate of PHS and has a son in 1st grade and a daughter who will start school next year.  The IU grad said, “I like the direction Plymouth is heading and I would like to have input in the direction the school grows.”  Sickmiller noted her experience working with budgets and being a people person with the willingness to listen and learn.

The final candidate was Paul Murasko moved to Plymouth 7 years ago with his family.  His employer, Johnson & Johnson encourages upper management to get involved in their communities.  Murasko served on a community input session for the school and is currently on the facilities task force.  He noted tough decisions that lay ahead for the school board including a determination of doing continued “band-aid” work at Lincoln Junior High or consideration of a new facility would last 40 to 50 years.

The four school board members: Todd Samuelson, Larry Pinkerton, Larry Holloway and Melissa Christenson asked many questions of the candidates.  They will vote during another special meeting on April 29th at 7 p.m. for the candidate of their choice.  If by chance there is a tie, Circuit Court Judge Curt Palmer will make the decision.