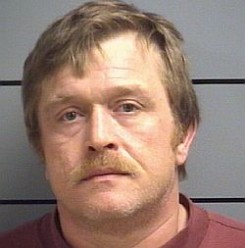 In a complicated chain of events, Olan Howard, 38 of Argos, was sentenced on Wednesday, April 9, 2014 to the Indiana Department of Corrections for his role in the untimely death of Stephen Vires of Argos, that resulted from Vires’ overdose of morphine or heroin.  Howard was originally charged by Grand Jury Indictment on February 26, 2013 for the crime of murder and dealing in a schedule I controlled substance.  It was alleged then that Vires died from heroin or morphine supplied by Howard on May 19, 2012.

Judge Robert O. Bowen approved an agreement reached between Chief Deputy Prosecuting Attorney Nelson Chipman and defense counsel Tom A. Black.  Howard originally pled guilty to involuntary manslaughter on January 9, 2014, pursuant to a plea agreement reached between the two lawyers.  Prior to the sentencing hearing on February 26, the prosecution requested the plea of guilty be set aside and the matter set for trial for the reason that Howard had not fully taken responsibility for his role in the death.  Judge Bowen granted that motion and the matter was moving forward to a trial when a second agreement was reached in which Howard fully admitted to his involvement.

A second amended information was filed on March 26, 2014 which accurately alleged that Howard had assisted Stephen Vires in acquiring the illegal drugs, which is a Class D felony.  Involuntary manslaughter, based on the allegation of committing a D felony that results in death, is a Class C felony.  A new submission of plea agreement and sentencing was scheduled for April 9, at which time Bowen sentenced Howard to three years imprisonment with one year suspended and one year of reporting probation.

Chipman explained in open court that subsequent investigation had revealed a long history of drug abuse by the victim and that extensive toxicology test results showed clearly that the victim had other illegal substances in his blood stream at the time of death besides the morphine or heroin supplied by Howard.  An expert hired by the defense confirmed the prosecution’s theory that the final dose of morphine led to Vires’ death, but it was overall the combination of drugs that was lethal.

Furthermore, Howard and Vires were cousins and, some of the witnesses said, best friends.  Chipman explained no one has ever claimed that Howard intended to kill his cousin, but sadly it occurred through both of their acts.  Consequently, we were convinced a jury would not find Howard guilty of murder, and the best we could hope for with the evidence we had was an involuntary manslaughter conviction.  Justice was served with this agreed conviction.