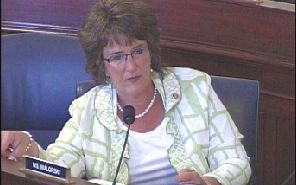 WASHINGTON D.C. – Wednesday, as part of her efforts to bring accountability to the Department of Veterans Affairs, Congresswoman Jackie Walorski (IN-02) participated in a House Committee on Veterans Affairs hearing entitled, “A Continued Assessment of Delays in VA Medical Care and Preventable Veteran Deaths.” Walorski, a member of the committee, heard heartbreaking testimony from Barry Coates, a terminally ill veteran, who spoke of the gross negligence and crippling backlog within the VA medical system.

Indiana Republican Jackie Walorski, whose father died of colon cancer, broke into tears while questioning Coates. She called the VA “a bureaucratic system that is broken.” (National Journal)

“This is a bureaucracy that’s out of control,” said Rep. Jackie Walorski, R-Ind. “If this happened in the civilian world . . . we would be in the streets with signs saying, ‘Shut them down.’” (McClatchy DC)

The freshman congresswoman broke into tears after an Army veteran testified that he is dying of terminal cancer because doctors at a Department of Veterans Affairs hospital in South Carolina failed to perform a routine colonoscopy when he had blood in his stool. “I don’t know how they sleep at night. I really don’t,” said U.S. Rep. Jackie Walorski, R-Indiana, whose father, Air Force veteran Ray Walorski, died of colon cancer in 2007. (Center for Investigative Reporting)

“If this happened in the civilian world where negligence was proven time and time again, we would be in the streets with signs saying shut them down,” said Rep. Jackie Walorski, Republican from Indiana. “It’s an outrage is what it is. This is an outrage.” (WIS TV (South Carolina)

Watch Walorski’s remarks after hearing Mr. Coates’s testimony here, or click on the image below.

Walorski has co-sponsored H.R. 4031 the “Department of Veterans Affairs Management Accountability Act of 2014” in the House of Representatives to address widespread problems currently plaguing the VA.