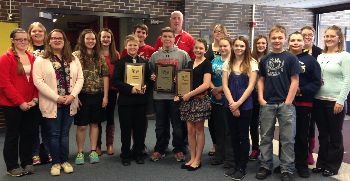 On Saturday, April 5th, the Lincoln Junior High Bands and Orchestra traveled to Knox Middle School to compete in the Indiana State School Music Association Organizational Festival for junior high/middle school bands and orchestras. All students in band and orchestra at the 7th and 8thgrade level represented their school at this festival.

“This was a highly polished performance with many hours of work put in. These students are some of the most musically mature students that I have worked with and that speaks highly of all the music programs here in Plymouth,” stated orchestra director Jodi Kallenberg.

“The 8th graders played very difficult music that required students to be much more individually accountable. Many students had solo parts. I am extremely proud of all the band members in both grades though. They exceeded all of my expectations,” said band director Lisa Wallyn.

If you missed these performances, you can hear some of these selections and more this coming weekend at the Lincoln Junior High Craft Show and Nelson’s Port-a-Pit Chicken sale. Bands, choirs, and orchestras from Lincoln Junior High School and Riverside Intermediate School will be featured alongside many different craft and food items. This year’s craft show also features a children’s carnival. The event runs from 11:00-2:00 on Saturday, April 12th in Lincoln’s gyms and cafeteria.

(Attached picture shows members of the bands and orchestra posing with their gold medal plaques along with Principal Reid Gault and Orchestra Director Jodi Kallenberg.)