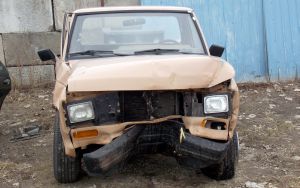 Matt Brown responded to a one vehicle accident at Oak Road south of 6A Road. The driver, 53 year old Robert Dille of Argos was southbound on Oak Road in a Ford Ranger.   He told Officer Brown that he traveled over several pot holes in the roadway and that caused him to lose control of his truck.

The truck traveled of the east side of the roadway striking a tree and then spun approximately 180 degrees before coming to rest.  Dille was transported by Plymouth EMS to St. Joseph Regional Medical Center for treated of minor injuries and later released.

Lyons Towing assisted in the removal of the vehicle due to the extensive damage caused by the accident.