DONALDSON, Ind.—MoonTree Studios invites you to the opening reception for the Michiana Calligraphy Guild’s All-Members Exhibit and Calligraphy Fest, to be held Saturday, April 5, 2014 from 1:00 to 4:00 p.m. EDT. The featured exhibitors are all members of the group, which was founded nearly 22 years ago by Anne Binder and Sylvia Godsey. Michiana Calligraphy Guild’s All-Members Exhibit will be displayed at MoonTree Gallery through May 11, 2014.

The Calligraphy Guild’s exhibit at MoonTree Studios will include handmade books, broadsides, work on paper and work on canvas, watercolors, as well as cards for sale. The Guild includes a very eclectic group of ladies (no gentlemen at this time,) so there is a variety of calligraphy work.  Everyone has a different style and/or a favorite hand they like to use, so there will be a variety of artwork to enjoy. 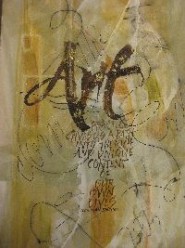 A special feature of the opening reception will be guild members doing calligraphy on bookmarks, demonstrating how to create zentangles, and making handmade books. There will also be “make and take” projects for visitors to the opening reception at MoonTree Studios. This “Calligraphy Fest” will only take place on the exhibit’s opening day, April 5, from 1:00 to 4:00 p.m.

In addition to calligraphy, Michiana Calligraphy Guild members dabble with other media, such as watercolors, acrylics, and mixed media; they do scrap-booking and artist books. Once in awhile, smaller groups gather, deciding what to do together; whether to letter, paint, or look through each other’s collections of calligraphy and art books. Some members attend study groups to learn calligraphy from each other. Anne Binder has been teaching classes for many years in her home studio and internationally. Ginny Vander Hey and Angie West have also taught calligraphy classes. 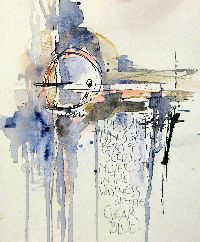 The group has a website, michianacalligraphy.com which lists monthly meetings and workshops, guild officers, and yearly dues. Anyone can join, whether they are an accomplished calligrapher or someone who wants to learn. The group meets monthly in South Bend. They also host at least one workshop a year and bring in a qualified instructor, providing two days of uninterrupted time to learn or expand on different art forms that combine with calligraphy, such as illumination, backgrounds, and paste paper. Michiana Calligraphy Guild even has a small cookbook that presents members’ favorite recipes, all written in calligraphy.

The group believes that the most important attribute of an artist/calligrapher is the ability to find inspiration anywhere. Member Ginny Vander Hey says, “We are not a big organization, but we are mighty! We encourage each other and are always available to share what we have learned with others.”